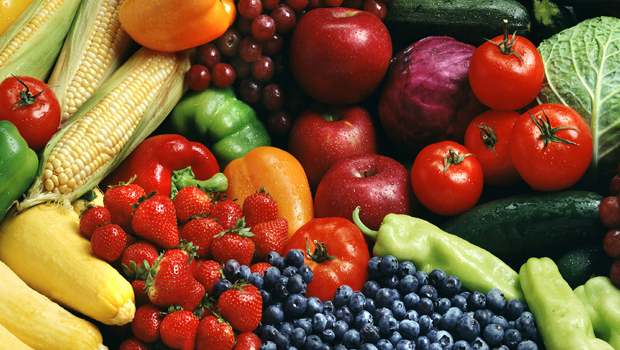 Healthy Benefits of Vegetables and Fruits

There are a number of studies which suggest that a diet rich in vegetables and fruits may greatly reduce risk of a number of degenerative illness, such as heart disease, diabetes and cancer as well as to promote health in general and boost the immune system. There is an abundance of research on the health benefits of eating a diet rich in vegetables and fruits. To reap the known health benefits of fruits and vegetables eat a wide variety and eat 3-5 servings of fruit and 5-7 servings of vegetables every day.

Teens who consumed the least amount of vitamin E, either in food or supplement form, were more likely to have asthma, now one of the most common diseases among adolescents. Present in green leafy vegetables, vegetable oils, nuts, cereals, and meats, vitamin E is essential for maintaining normal lung cell structure and protecting lungs and other tissues from damage by pollutants.

Vitamin C is also necessary for protecting lungs and other organs from infections and the general wear and tear of living. Good sources of it include oranges, lemons, tomatoes, green veggies, potatoes, and strawberries. Most of the teens in the study got the daily recommended amount of vitamin C mainly from fruit punch cordial, which is not the best way to get the vitamin.

Antioxidants in Fruits and Vegetables May Protect Against Colon Cancer

Another study published by the Ohio State University suggests that understanding the molecular structures of the compounds that give certain fruits and vegetables their bright, rich colors may help researchers find even more powerful cancer fighters. Evidence from laboratory experiments on rats and on human colon cancer cells suggests that anthocyanins, the compounds that give color to most red, purple and blue fruits and vegetables greatly slow the growth of colon cancer cells. The findings also bring scientists a step closer to figuring out what exactly gives fruits and vegetables their cancer-fighting properties.

researchers found that a low intake of fruit, vegetables and oily fish (such as salmon) in teenagers is related to lung conditions such as asthma, wheezing, coughing and bronchitis

An Apple a Day May Keep the Doctor Away

A study completed by researchers at the University of California Davis Medical School studied the effect of eating apples and drinking apple juice on heart disease risk. The study showed that study participants who included apples in the diet (and without making any other dietary changes), were able to reduce their risk of heart disease. This is because apples are full of a number of antioxidant phytochemical substances that greatly decrease LDL cholesterol oxidation, which can build up in artery walls and causes heart attack and stroke.

Researchers from the University of Nottingham, UK, recently reported that people who eat 5 or more apples a week have better lung function and lower risk of asthma and other respiratory disease compared to people who rarely eat apples. Their findings were based on a 10-year study involving 2,633 people examining relationships between diet and respiratory health. The researchers suspect that antioxidants in apples lead to these health benefits. In 1997 Finnish researchers reported that the antioxidant flavonoids may reduce the risk of lung cancer. This finding is based on a 25-year study examining relationships between diet and health in nearly 10,000 Finnish men.

The Powerful Antixodants in Blueberries

A study by Tufts University in Boston showed that blueberries ranked number one in antioxidant content out of the 40 fruits and vegetables studied. This study was initially conducted in 1999, but a later study confirmed these results by reporting that older rats fed blueberry extracts outperformed their study counterparts on balance, coordination and memory tests. The researchers have suggested that the phytochemical antioxidants in blueberries are responsible for the cognition and other benefits. These studies on blueberries are promising and more studies are planned to determine the effect of blueberries on ageing adults.